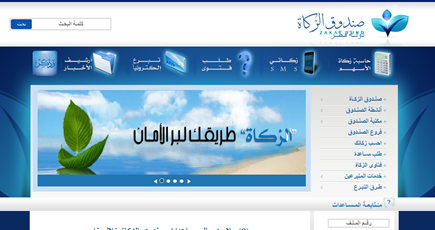 Zakat Fund of the Ministry of Endowments and Islamic Affairs announced that the number of its e-services users and social media followers has reached 18,000 including 14,000 on Facebook, over 2,600 on Twitter and more that 1,400 on Instagram. The Fund noted the role of the Information Systems Department at the Ministry of Endowments in preparing and implementing the applications and electronic platforms to provide the Fund's services electronically in a manner that is compatible with the mission of the Fund in serving this great pillar of Islam. The Fund, which is the official Zakat institution in the country, citing the strong interaction between the public and the Fund on the internet and social networks, asserted its keenness to use modern communications technology through providing interactive electronic platforms. In this context, Dr Mohamed bin Khalifa Al Kubaisi, Section Head of Zakat Services at the Fund, stated that the Fund is working constantly to develop its technology to serve this Islamic duty, and that it has now become a landmark among Zakat organizations in the region. The Fund, as he said, exerts great efforts to improve its tools to ensure the safety of collection and distribution, noting the efforts exerted by its Information Systems Department in providing sophisticated, accurate and easy to use&nbsp; applications, adding that "the Fund has succeeded in developing itself electronically and in delivering its message through modern electronic means that are now widely spread in all segments of the society." He clarified that the Fund was providing its diverse services through a package of advanced electronic instruments, aiming to implant the principles of social justice, promote awareness of the pillar of Zakat and facilitate payment of Zakat in the simplest and easiest ways. He said that Fund's website, being the official platform, comes at the top of these instruments, with its homepage that features a general introduction to the Fund, a stocks zakat calculator, other self-service zakat calculators, which omit the need for questions and answers, in addition to links for Fatwa on Zakat related topics and others for electronic donation. The page reviews the Fund's activities and publications and shows its branches in all important parts of the country. The website has become an important reference for researchers and all those interested in the third pillar of Islam. Dr Al Kubaisi acknowledged the presence of the Fund on social media websites, particularly Facebook,&nbsp; being the largest in terms of impact and penetration. Since the Fund has activated its page on Facebook, the number of followers has jumped to record figures in a relatively very short time, reaching 14,000 in Qatar and abroad. Those wishing to communicate with the Fund on Facebook can reach it through this link. The second most popular social network is Twitter, due to the fast pace of tweets, with a number of fans exceeding 2,600. Those wishing to communicate with the Fund&nbsp; through Twitter can do so by using this link. He also noted the presence of the Fund in Insagram, which enables sharing of photos and public and private events. The Fund's page on Instagram was launched the latest, however, the number of fans has so far exceeded 1400. The high online interaction of the public with the Fund is due to a number of factors including the quality of the posts, in terms of technical quality, attractive format and design and the scientific material given, which are responsive to the needs of donors. When donors see how the Fund operates and the modern and simple methods and mechanisms it uses in collecting donations, they get more motivated and more engaged. The Fund provides donors, among a number of electronic facilities, with a facility to make their Zakat payments through Qatar Islamic Bank's (QIB) and Al Rayyan Bank's ATM machines distributed all over the country. Zakat can also be paid to the Fast Collector who records the payment on the Fund website directly and issues a receipt using a micro printer connected to the website.