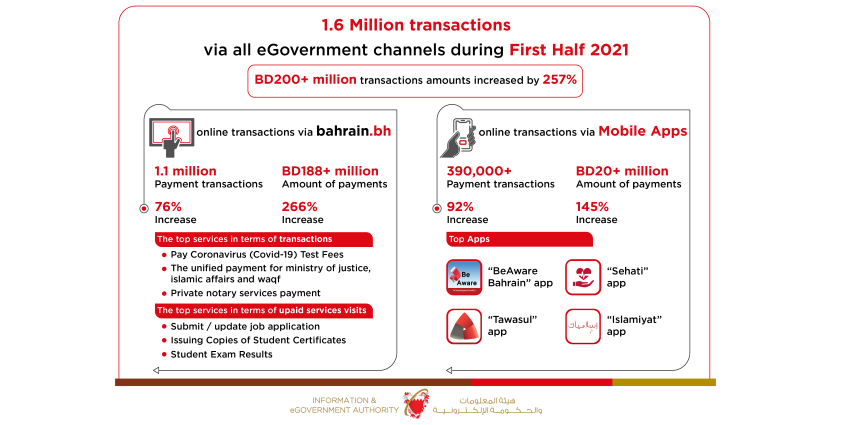 Revenues from eServices across channels exceeded BD200 million during the first half of 2021, soaring by 257% compared to the same period last year, the Information & eGovernment Authority (iGA) revealed. The results, announced in an H1 2021 report, reflect the role that eServices play in matching the demands of individuals, government entities, and business owners, particularly during the pandemic, and their steady progress towards achieving the Kingdom’s digital transformation aspirations. The number of financial transactions carried out through e different electronic Channels in the first half of this year exceeded 1.6 million, double the number recorded during the same period last year, indicating a high level of trust in the quality of services provided. Advanced technologies deployed in carrying out these tasks have contributed to enhancing the quality of government performance. iGA Acting Chief Executive, Dr. Zakareya Ahmed AlKhajah said that digital transformation and Information and Communication Technology (ICT) initiatives are given the highest priority by the Kingdom’s senior leadership, noting that the Supreme Committee for Information and Communication Technology (SCICT), chaired by Deputy Prime Minister, HH Shaikh Mohammed bin Mubarak Al Khalifa, continuously issues directives in this regard. He also highlighted the directives and support of the Minister of Interior, H.E. Lt- Gen. Rashid bin Abdulla Al Khalifa to develop and continue offering eServices to the public despite the circumstances imposed by the coronavirus pandemic. AlKhajah said that the iGA is continuing its efforts towards the complete digitization of government offerings, creating more transparency, and offering the highest quality of online services. He praised the cooperation of other government entities, which resulted in accelerating the digitization process. He thanked the ICT team members at public and private organizations, who displayed a high degree of professionalism and adaptability to new technologies. The report revealed other significant results during H1 2021, including that more than 1.1 million financial transactions were carried out via the National Portal, bahrain.bh, an increase of 76% compared to the same period of last year. eServices amount generated through the Portal were approximately BD188 million, more than double compared to H1 2020. The top ePayment services used via the Portal were (Electricity Deposit Payment Service) and (Pay Coronavirus -Covid-19 Test Fees), (MOJ Unified Payment), (Private Notary), and (Passport Renewals). The most used services included (Employment Application for the Civil Service Bureau), (Issuing Copies of Student Certificates) and (Student Exam Results). The report also showed an increase in transactions carried out via smart device apps, which exceeded 390,000, a 92% spike compared to H1 2020. The amounts generated from these apps was over BD20 million, a 145% increase. BeAware Bahrain was the most frequently used app, highlighting its importance in providing information to users during the pandemic, including the latest updates regarding precautions to be taken in public, as well as its usefulness in conducting transactions such as COVID-19 PCR test fee payments. Also among the most used apps was Sehati, which offers a service for booking appointments at health centers; Islamiyat, due to its popular Fa’el Khair donation collection service; and the National Suggestions and Complaints App, Tawasul.