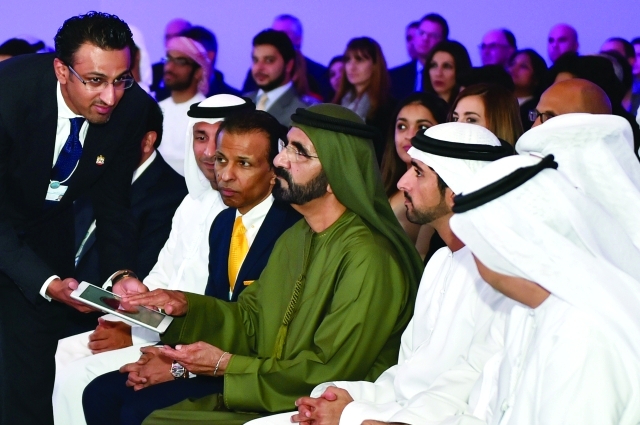 Shaikh Mohammed was briefed on the first of its kind initiative in the region. His Highness Shaikh Mohammed bin Rashid Al Maktoum, Vice-President and Prime Minister of the UAE and Ruler of Dubai, has attended the launch of GEMS Education, an initiative by The Arab Innovation Centre for Education, on the sideline of the 3rd Government Summit 2015, running from February 9 to 11. Shaikh Mohammed was briefed on the first of its kind initiative in the region, in the presence of Shaikh Hamdan bin Mohammed bin Rashid Al Maktoum, Crown Prince of Dubai and Chairman of Dubai Executive Council, and Mohammed Abdullah Al Gergawi, Minister of Cabinet Affairs and Chairman of the Organising Committee of Government Summit. The Arab Innovation Centre will offer a platform for research to promote international best practices in the field of innovation and education and will incubate emerging business projects developed by UAE nationals in the education sector. It will also serve as an environment that allows young Emiratis and GEMS students, interested in the education field to showcase their entrepreneurship skills as well as the practical implementation of their ideas. The President, His Highness Shaikh Khalifa bin Zayed Al Nahyan, last year announced 2015 as the "Year of innovation", in line with plans to make the country a world leader in the field which will help boost research, attract national skills, and develop future leaders in the UAE.