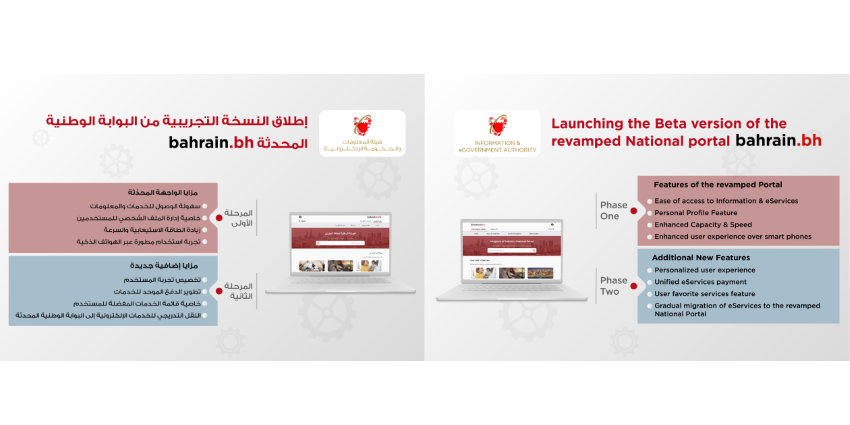 • New portal implements user feedback • Soft Launch (Beta version) is part of Phase One; gradual revamp to continue in phases until early 2022 • Revamped portal will facilitate user access to information and eServices, enhanced overall capacity & speed Phase One of the National Portal revamp has been launched, Information & eGovernment Authority (iGA) Chief Executive, Mohammed Ali Al Qaed announced. The new and improved version of the Kingdom’s National Portal bahrain.bh is among the initiatives put forward by the Supreme Council for Information and Communication Technology (SCICT) to the Coordinating Committee, which approved it. Its scope includes enhancements to the Portal’s content to improve user experience, update its infrastructure, offer personalized services, and encourage eParticipation. Al Qaed stated that the Beta version implements feedback collected through the iGA’s annual customer satisfaction report, a survey conducted between 30th December 2020 and 15th February 2021, and suggestions received by the iGA previously through different platforms. He said that the Portal’s design, services, and features will be gradually developed over several phases until early next year, and that it closely follows United Nations (UN) eGovernment standards. Notable features include easier access to information and eServices; management of users’ profiles containing personal data as recorded by government; enhanced user experience over smartphones; and increased capacity to enhance user experience and navigation. Al Qaed stated that since the portal’s launch in 2007 under the patronage of Deputy Prime Minister and SCICT Chairman, HH Shaikh Mohammed bin Mubarak Al Khalifa, the iGA has dedicated significant resources and capabilities towards creating and developing bahrain.bh. It made major progress in developing the Portal under the supervision of the Minister of Interior, Gen. Rashid bin Abdullah Al Khalifa, adding information for more than 1,000 government eServices and 500 other eServices, and connecting over 40 government entities digitally. With a plan to double the current content, the Authority will need to carry out the revamp gradually over phases to manage this massive amount of data, and to give it the time needed to create a comprehensive website and migrate eServices onto it to ensure their accessibility to the public. With the completion of Phase One the journey continues with more improvements. The next phase will include an improvement in the unified eservice payment platform, the ability for users to customize their experience by creating a list of their favorite eServices, and gradual migration of eServices to the revamped system. Al Qaed invited the public and private sectors, civil society organizations, and citizens and residents to visit bahrain.bh to experience the Beta version and join the iGA on its journey to improve the National Portal via the feedback page noted in the link on top of the portal and also via the National Suggestions and Complaints System, ‘Tawasul’, or by participating in focus groups and discussions which will be announcing soon. He assured the public that all collected feedback will be studied and those that are deemed feasible will be implemented.