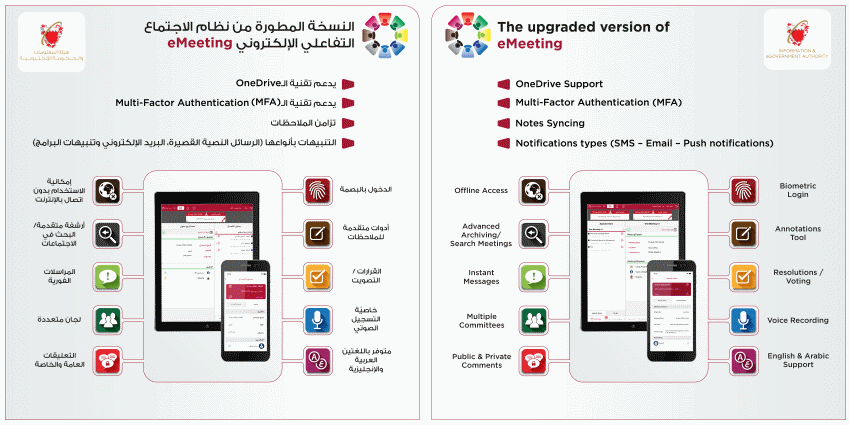 The Information & eGovernment Authority (iGA) launched an updated version of its interactive conferencing system, eMeeting, which has been revamped to include several performance-enhancing features. The updated version was launched in response to feedback from users of the system, an important government initiative that empowers the boards and executive committees of governmental and non-governmental entities to hold meetings remotely via smart devices. The move is in line with government directives to replace physical meetings with seamless and secure virtual conferencing. iGA Chief Executive, Mohammed Ali Al Qaed said that the new version of eMeeting, which had its first version released in 2013, is part of a series of digital service developments and updates implemented by the iGA to support government activities and ensure business continuity for public and private sectors users of government systems. The flexibility of the system and its adaptability to different work environments allow it to accommodate meetings of all kinds, saving time and resources, and automating repetitious procedures. Al Qaed reaffirmed the iGA’s commitment to its eServices development strategy, which is built on a number of pillars including listening to the comments and suggestions of public and private sector beneficiaries. The iGA adopted this approach with its latest update, which is in line with directives by the Kingdom’s senior leadership to be in constant communication with the public. This update addresses increasing demand by users, and is also in line with the government’s strategic approach to adopt digital services and make them available via apps that can be accessed on smartphones in a secure manner that safeguards data and ensures privacy. The updated version of eMeeting includes features for attending video conferences via iPhones, which will allow users to receive updates related to meetings that can be viewed on their devices. This is in addition to a split screen feature for attendees who use iPads. The update also includes Microsoft One-Drive features, allowing users to access services via the cloud, and giving them more storage space for shared files, which are accessible safely from anywhere in the world. The system, available in Arabic and English, also allows users to view meeting materials, retrieve documents through a preferred type of display, communicate via instant messages, take notes, and send private and public comments to all participants. In addition, it offers offline access to files; the ability to send attachments via emails; the ability to comment on files, including an option to include email signatures; and the ability to vote on proposals during meetings by selecting whether to agree, reject, or abstain. Audio and video files can also be shared, and meetings can be classified based on importance. eMeeting was launched to accommodate the needs of meeting attendees of all levels, including executives, non-executives, senior management, employees, and executive secretaries. The first digital system of its kind in the Kingdom for initiating and managing online meetings, it has resulted in direct and indirect cost savings for its public and private sector users.