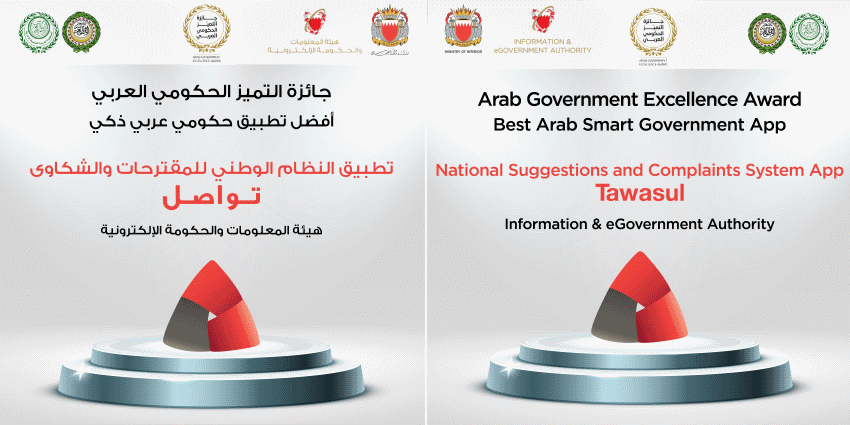 The Information & eGovernment Authority (iGA) achieved major regional recognition, winning the Arab Government Excellence (AGE) Award for Best Smart Government Application for its ‘Tawasul’ app. The awards event, in its first edition, was launched by the UAE government in cooperation with the League of Arab States, as represented by the Arab Administrative Development Organization (ARADO). On behalf of the iGA, its Chief Executive, Mohammed Ali Al Qaed expressed his pride in the win, offering his congratulations to HRH Prince Salman bin Hamad Al Khalifa, the Crown Prince and Prime Minister of Bahrain. He emphasized that the win was due in great part to the directives of HRH Prince Salman, which have always emphasized the importance of communication between government entities and the public through open communication channels. Al Qaed also highlighted the role of the Minister of Interior, HE Gen. Shaikh Rashid bin Abdulla Al Khalifa who’s support helped create one of the most important digital platforms linking Bahrain’s government to the public. He also expressed his appreciation to the Bahrainis who developed and launched the app to much acclaim and success. The app has received regional and global accolades, including having previously being named Best Government Application at the His Highness Shaikh Salem Al-Ali Al-Sabah Informatics Awards in 2019 in Kuwait and being highlighted in the 2020 United Nations e-Government Survey. Al Qaed added that Tawasul’s latest recognition appreciated the app’s innovative features and its ease of use, in addition to its proven effectiveness in allowing citizens and residents to submit real time suggestions and inquiries related to government services. Since Tawasul’s launch in 2016, the iGA has received more than 175,000 submissions. Between January and October 2020, the total number of cases reached 69,000, 70% of which were received via the app, affirming its importance as a necessary tool for effective government communication with the public. He added that the iGA responds quickly to all submissions received, achieving a 99% fulfillment of its Service-Level Agreement (SLA).